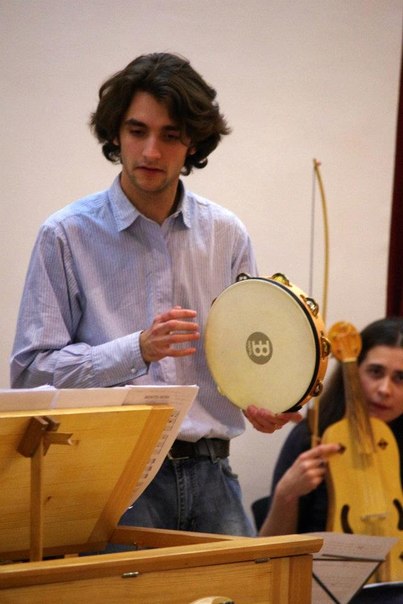 Ivan (Jean) Velikanov, a young French and Russian conductor, composer and early music performer, was born in France in 1986 and moved to Russia at the age of 7. His musical interests span over all epochs from the late Medieval to Contemporary. After initial music tuition that started at the age of 5 in Paris, and then continued at the Moscow Academic Music College (2000-2004), he entered the Moscow Conservatory in 2004, where he studied composition with prof. Roman Ledenyov (graduated in 2009), and orchestra conducting with prof. Gennady Rozhdestvensky (graduated in 2012). Also, studied orchestra conducting with prof. Vladimir Altschuler (St. Petersburg) and harpsichord and continuo with prof. Maria Uspenskaya (Moscow). In addition to the formal tuition, participated in master-classes in orchestra conducting with K. Masur (2006), K. Kiesler (2007), Th. Currentzis (2008), sir R. Norrington (2010), G. Gelmetti (2014), G. Lanzetta (2015), M. Jurowski (2016, 2018), A. Polyanichko, S. M?kil? (2017), K. J?rvi (2018). Award-winner of the 2nd Ilya Musin orchestra conductors competition (2011).

Ivan’s compositions include an oratorio “The seven Words of Christ on the Cross”, and a stage work “Setanta, or the Fearless Hound of Ulster”, a choreo-choral drama in four acts, libretto by I. Velikanov based on motifs from the Irish sagas and plays of W.B. Yeats. With this work he won the Bolshoi Theatre contest for creation of a musical stage work for children and teenagers (2008).

Ivan’s interest in early music dates from his child years when he was performing as descant with the Moscow Madrigal ensemble. Later on, he learns to play cornetto, organ and organetto (early Renaissance portable organ), first by self-tuition, then by taking lessons from the world-class musicians such as W. Dongois (2010, 2011, 2012), J. Tubery (2011, 2013), G. P?rez (2011, 2012, 2013). Then, in 2009 he creates Alta Capella, the first Russian early music ensemble playing historical wind instruments. With this ensemble he performs, in several concert programmes, an immense instrumental and vocal repertoire ranging from XIII to XVII centuries. In 2011 he creates La Renaissance International festival of music and dance in Moscow. He invites to Moscow the best European interpreters on various period instruments, to give open master-classes followed by public performances with the participants.

In 2012, Ivan was engaged as project assistant of A. Lawrence-King in his stage production of E. de’ Cavalieri’s opera «Rappresentazione di anima, et di corpo» in the N. Satz Childrens’ Music Theatre, Moscow; the next year, this work received special prize of the “Golden Mask” National Theatre contest. In 2014-2015 also worked as assistant to Vladimir Jurowski (incl. a concert version of R. Strauss’ “Salom?”), with his Alta Capella ensemble, he participated in Vladimir Jurowski’s concert programmes juxtaposing Romantic repertoire with thematically related Renaissance and Baroque pieces.

In 2014 Ivan was invited as guest conductor by the Sakha (Yakutia) Republic Academic Opera and Ballet Theatre (where he produced a renovated stage performance of Mozart’s “Die Zauberfl?te”), by the Krasnoyarsk State Opera and Ballet Theatre (“The Snow Maiden” of N. Rimsky-Korsakov). In the summer of the same year he was engaged by the Pavel Slobodkin’s Centre, Moscow, as a second conductor of the Centre’s Small Symphony Orchestra. In the 2014-2015 season he gave several concerts with this orchestra, performing a large repertoire ranging from Haydn to Prokofiev, esp. a whole series of famous violin concertos.

In 2014-2017 Ivan was engaged as assistant conductor in the Stanislavsky and Nemirovich-Danchenko Moscow Academic Music Theatre. There, he has created the Russian premiere of “A Gentle Spirit (Krotkaya)” opera by J. Tavener, and the World premiere of “Rashomon. Variations”, a ballet by G. Varlamov. He also conducted children’s programmes, with “Carnival of the Animals” (Saint-Sa?ns), “The Young Person’s Guide to the Orchestra” (Britten), “Peter and the Wolf” (Prokofiev), “Aladdin’s Magic Lamp” (opera by N. Rota). He teached historically informed singing of Renaissance and Baroque repertoire to the Theatre’s vocalists, and regularly performed with them in the Atrium of the Theatre.

He regularly performs as a conductor with various chamber orchestras, among them Toscana Classica (Florence, 2016), Volga Philharmonic (Samara, 2018), chamber composition of the Rostov-on-the-Don Philharmonic orchestra (2018).

Also Ivan was invited by the Novosibirsk Academic Opera and Ballet Theatre, where he worked as assistant and 2nd conductor with Dmitri Jurowski on the stage production of Verdi’s “Un Ballo in Maschera”. In 2018 has created premiere of “Le Cinesi” opera by Gl?ck (stage director – T. Mitkalyova; Tarusa, Writer’s House).