Baroque-harp virtuoso and imaginative continuo-player, Andrew Lawrence-King is one of the world’s leading performers of early music.

Andrew Lawrence-King’s musical career began as Head Chorister at the Cathedral and Parish Church of St Peter Port Guernsey, whence he won an Organ Scholarship to Cambridge, completing his studies at the London Early Music Centre. He made his London professional debut at the BBC Promenade Concerts, and rapidly established himself as a versatile continuo-player with Europe’s foremost specialist ensembles. In 1988 he founded and co-directed the continuo-group Tragicomedia. He joined Jordi Savall’s Hesperion XX, and was appointed Professor of Harp and Continuo at the Akademie f?r Alte Musik, Bremen, and the Escuela Superior de Musica de Catalunya in Barcelona. He has also taught at the Sibelius Academy and Helsinki Stadia (Finland), and is a regular teacher at the Historical Harp Society of Ireland’s Scoilnag Cl?irseach.

Andrew Lawrence-King conducted a staged production of Peri’s Euridice at the Los Angeles Getty Centre for the 400thanniversary of the earliest opera, and this season he directs Monteverdi’s Orfeo and the medieval Ludus Danielis in Copenhagen. His work on 17th-century dances with Steven Player & The Harp Consort has won the ensemble an unparalleled reputation for stylish and entertaining stage-shows, and his duo album with Paul Hillier was chosen by Elvis Costello as record of the year in Rolling Stone magazine. Andrew’s work on early Irish harps has gained considerable attention in traditional music circles, and the two CDs of Celtic Viol, in which Andrew accompanies Jordi Savall, were awarded the Spanish Premio de la M?sica in consecutive years. Andrew was awarded an honorary doctorate by Sheffield University for his achievements in Baroque opera.

Andrew Lawrence-King now divides his time between solo recitals, tours with The Harp Consort, and appearances as guest director for orchestras, choirs and baroque operas in Europe, Scandinavia and the Americas, interspersed with worldwide performances of Luz y norte and Missa Mexicana. He is Principal Guest Director of Concerto Copenhagen (Scandinavia’s leading baroque orchestra), the Florentine ensemble, L’Homme Arm? (specializing in baroque opera and oratorio) and the new Portuguese ensemble, La Portingaloise. He was awarded a three-year Research Fellowship by the UK Arts and Humanities Research Council to research Spanish Baroque music-drama. He is now Senior Visiting Research Fellow at the University of Western Australia, Perth; Professor of Early Harp at the Guildhall School of Music & Drama, London; and teaches Harp & Continuo at the Royal Danish Academy of Music in Copenhagen. His first solo recital for Harmonia Mundi USA is Chor?graphie: Music for Louis XIV’s Dancing Masters. This season he has premiered a newly reconstructed Handel harp concerto in Kokkola, Kotka & Kouvola (Finland) and St Petersburg.

A keen sailor, Andrew holds the Royal Yachting Association’s coveted Ocean Yachtmaster certificate, and spends most of his free time aboard his boat, ‘Continuo’. This passion for the sea is expressed in his revival of Guernesiais traditional music, Les Travailleurs de la Mer: Ancient Songs from a Small Island. He lives in Guernsey with his wife, harp-maker Katerina Antonenko. 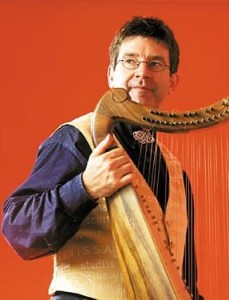